You are here: Home / Rules / Come Into the Kitchen [Pretty Much] Anytime – Just Don’t Volley While in There!

One of the primary differentiations between tennis and pickleball is that, unlike in tennis, in pickleball, there is a non-volley zone (most often referred to as a kitchen) in which players cannot enter and volley. Hopefully, the following provides clarification for this oft-misunderstood rule.

What is the Kitchen? 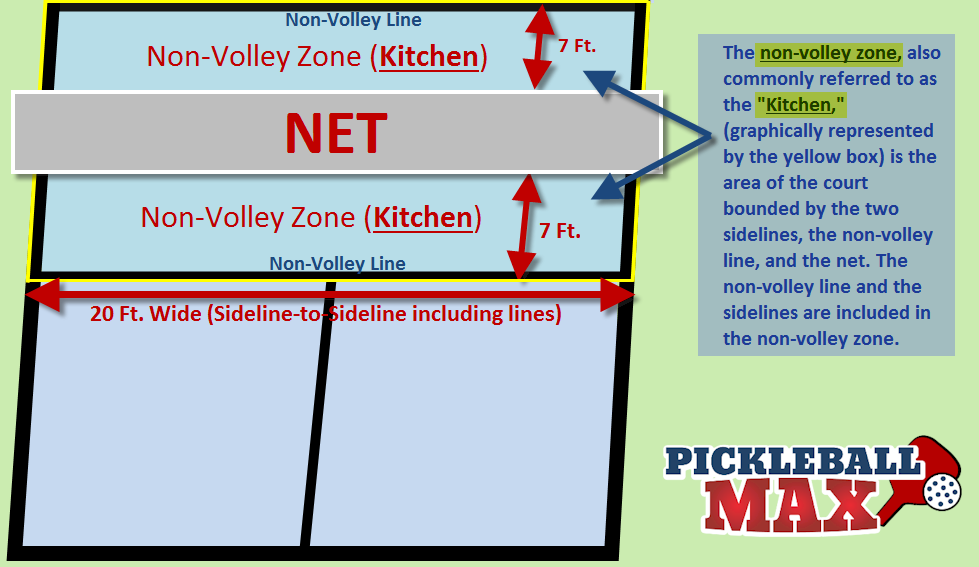 When Can I Enter the Kitchen?

You can enter the Kitchen at any time as long as you don’t hit a volley while in there.

What if my momentum carries me into the Kitchen?

Momentum is the only exception to the rule that you can enter the Kitchen at any time.  Rule 9.C. of the International Federation of Pickleball (IFP) Official Tournament Rulebook states the following:

That very last line that says “it is a fault even if the ball is declared dead before the player touches the non-volley zone” was not intuitive to me when I first picked up the game. I assumed that once the ball is dead (bounces twice, for example) that it didn’t matter if my momentum subsequently carried me into the Kitchen. That’s not correct, however. Momentum (stopping your body’s forward motion and establishing full control) must be stopped outside of the kitchen, regardless of what has happened to the ball.

Hopefully, that helps to clarify what and when one can enter the Kitchen. Hope to see you on the Pickleball Courts!

>>READ NEXT: Disagreement Over a NVZ Infraction in a Non-Officiated Match — What’s the Call?<<