Most competitive players will agree that the single-most critical and effective pickleball strategy is to get to the Non-Volley Line as quickly as possible. It’s at the non-volley line where a team can take control of the rally — or at the very least, mitigate the advantage your opponents have if they have gotten there first.  As such, savvy opponents will do everything they can do to keep you back and pinned to the baseline and moving backwards — deep serves, deep returns, and shots that land at your feet.  This is why it is imperative to “stand your ground” and, ultimately, keep moving forward.  A half-volley (short hop) is a shot that will help accomplish this goal. 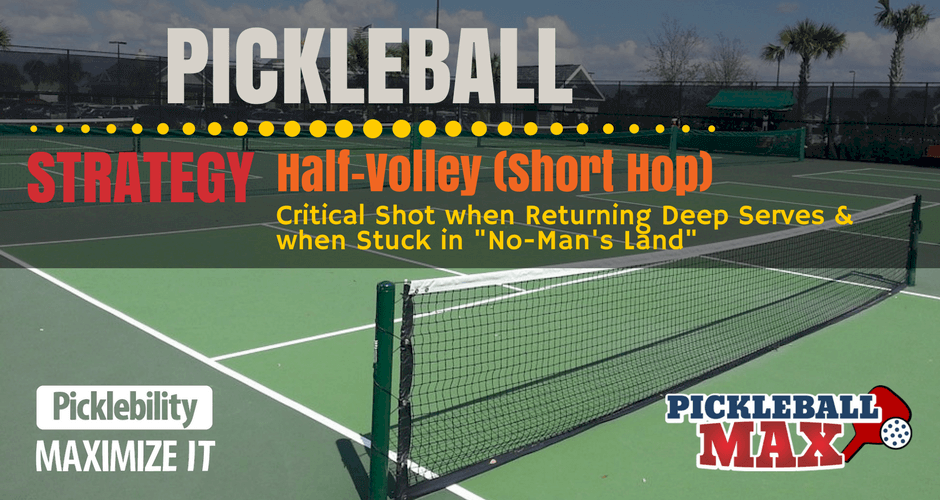 A half-volley (short hop) is a shot that is hit immediately after the ball bounces but before it reaches the apex of its bounce.  Although extremely difficult to successfully execute, there are occasions in which it may make sense to attempt the half-volley.

The serving team typically wants to hit a deep serve to make it as difficult as possible for the returner to get to the Non-Volley Line.  If the service returner lets a deep serve bounce as normal to waist height, the returner will be several feet behind the baseline when contacting the ball and, consequently, will likely get pinned there for several shots.  That, of course, opens up angles, increases their margin for error, and makes it easy for the serving team to pummel shots at your feet.

The half-volley service return, however, is an excellent rebuttal as — if properly executed — will shorten the distance it takes to get to the Non-Volley Line.  This shortened distance between you and the net will result in tougher angles for your opponent and will also make it more difficult for them to hit shots at your feet.  Most importantly it will keep your momentum moving forward which means you will get to the Non-Volley Line quicker where you will once again be in a position to win the rally.

Half-Volley When in No-Man’s Land

As you and your partner are making your way from the baseline to the Non-Volley line — often-times after execution of the third shot drop — there will be occasions where you won’t be able to make it all the way.  Your opponents will hit the ball — and continue hitting the ball — at your feet until you’re able to reset the point by blocking it back into their non-volley zone, at which time you and your partner will once again be able to get to the line.

Similar to the return-of-serve, if you back up when in no-man’s land you will give your opponents a much larger target to hit at your feet.  You will also open up huge angles for your opponents.  Instead of moving backward, you will want to attempt a volley or half-volley back into your opponents’ non-volley zone.  This will get you several steps closer to the Non-Volley Line and will make the next shot for your opponents much more difficult.

Technique for the Short Hop (Half-Volley)

As mentioned, the half-volley is an extraordinarily difficult shot to master — but mastering this shot will absolutely take your game to the next level.  I recommend drilling this shot in every practice session.  Here are a couple of techniques for successful execution of the half-volley.

We would love to hear from you.  If you have additional pickleball strategies for the return-of-serve or when caught in no-man’s land, please comment below.  You can also subscribe to our newsletter where we help you maximize your picklebility with additional strategies & tips, rules interpretations, and more.  See you on the courts!