Shake and bake is a term – recently trendy – that simply describes a “one-two punch” in pickleball in which one player from the serving team drives the ball on the third shot (but sometimes drops it) while his/her partner “crashes” forward and to the middle ahead of the player striking the ball in hopes of intercepting and putting away a weak volley from the team already positioned at the non-volley line. 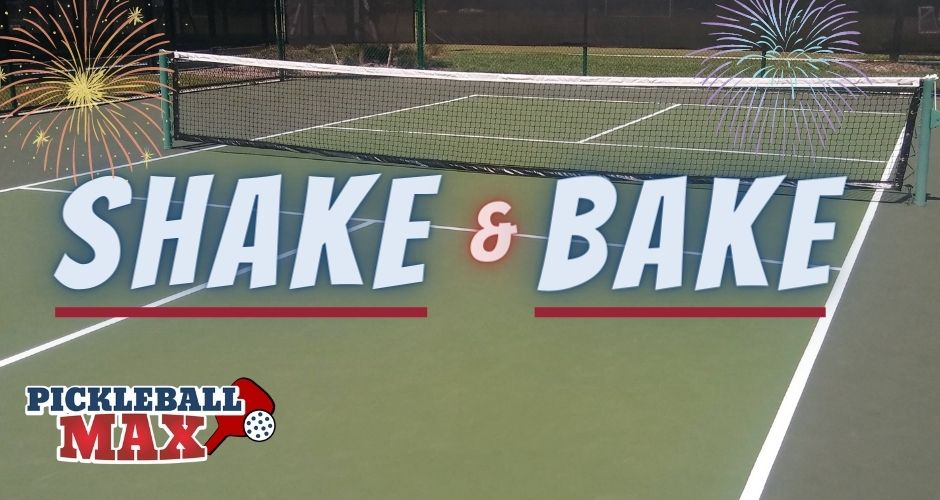 Analogy from the Boxing Ring

In boxing, a one-two punch is described as “a combination of two blows delivered in rapid succession, especially a left jab followed by a right cross.”

Think of the shake and bake in pickleball in similar terms – the drive (shake) is the left jab and the put-away volley (bake) is the right cross.

It’s a devastating combo in the boxing ring. Likewise, it can be a crushing momentum-swinger on the pickleball court.

Offensive Strategy that Puts Stress & Pressure on your Opponents

The shake and bake is a particularly effective strategy when your opponent hits a shorter and weaker return-of-serve as it gives the player driving the ball (the shaker) ample time to set up and hit a penetrating third shot drive.

The added pressure of responding with an unattackable fourth shot – and not popping up the volley to the player crashing forward and to the middle (the baker) – may very well lead to a pop-up or unforced error from your opponent and an easy point for you.

Important Considerations for the Player Driving the Ball (the Shaker)

As the player driving the ball, you will want to make sure that your opportunity to drive the ball is a good one. As such, you will want to pounce on a shorter return-of-serve and one that “sits” up a little bit. This will give you time to be balanced and well prepared to drive it. In addition to pace – or perhaps even in lieu of pace – look to dip the ball with some roll or topspin, so as to force your opponent to hit up on the ball from around their non-volley line.

In terms of court positioning, as you hit your third shot – and as your partner crashes forward and to the middle – be sure to cover the area of court that your partner just vacated. If you don’t do that, both you and your partner will be poorly positioned on the same side of the court with half the court open and exposed for your opponents to hit.

Important Considerations for the Player Crashing Forward (the Baker)

It is vitally important that you and your partner are on the same page as you execute this shake-and-bake strategy.  As the person who “disconnects” from your partner as they are driving the ball, you will want to pinch/squeeze the middle of the court and be ready to pounce on a weak reply from your opponent.

Make yourself big and intimidating. This added pressure will make it more difficult for your opponent to hit a quality fourth shot. If you do get that much-anticipated pop-up, be ready to put the ball away – hard at your opponent’s feet or towards a gap in your opponent’s positioning.

Defending Against the Shake and Bake

There are several strategies you can implement yourself to defend against the pickleball shake and bake – some of which can be classified as preventative measures and others that are simply considered smart shot selections.

Secondly, focus on hitting a deep return-of-serve. A deep return makes it much more difficult for the shaker to hit a penetrating drive as it’s further back and you will have more time to react.

A fourth option to diffuse the shake-and-bake is to volley the ball short and behind the player who is crashing forward and to the middle.

By wrong-footing the “baker,” they will have to respond with a more defensive shot.

A final option that may put a monkey-wrench into your opponent’s shake and bake strategy is to attack the body or non-dominant shoulder of the player crashing forward and to the middle. This will likely result in the “baker” getting jammed as they are expecting a forehand after they poach.

The shake and bake strategy can be a particularly effective strategy for those who have really good drives and a partner that is aggressive from the non-volley line. It’s a one-two punch that will likely result in some easy opportunities.

What about you? Have you and your partner tried the shake and bake? Let us know in the comments below.