You are here: Home / Pickleball 101 / What is Pickleball and How do you Play?

“What is pickleball, and, how do you play pickleball,” you ask?  Invented in 1965 on Bainbridge Island, just outside of Seattle, Washington – pickleball is a combination of tennis, ping-pong, and badminton that is played on a court about one-third the size of a tennis court (same dimensions as a badminton court) with a net that is 34 inches high at the center. Pickleball is played with a paddle (think over-sized ping-pong paddle) and perforated ball – somewhat similar (but not really) to a Wiffle Ball.

For the last several years, the sport of pickleball has been dubbed the “fastest-growing sport in America.”  According to the 2019 Sports & Fitness Industry Association (SFIA) Participant Report, there are currently approximately 3.3 million players in the United States.

Why is it Called Pickleball?

There are two differing accounts of how pickleball got its name.  To set the stage for these two theories, it’s important to first understand the “origin” of the sport.  In 1965, with their children bored with their “typical” summer-time activities, three dads – Joel Pritchard, Bill Bell, and Barney McCallum – created a game that incorporated elements of tennis, ping-pong, and badminton.

One account states that “the combination of different sports (tennis, ping-pong, badminton) is reminiscent of the pickle boat in crew where oarsmen were chosen from the leftovers of other boats.”  Now, I was never in crew – nor did I go to prep school – but it seems like a legit theory.

The second account states that the game was named after Joel Pritchard’s dog – named “Pickles.” According to this account, Pickles was known for chasing the ball, putting it in its mouth and running off the court.

How Do You Play Pickleball?

At its most basic level, the pickleball is served diagonally across the net to the opponent’s service court using an underhand motion. The ball is then hit back and forth across the net until a player fails to return the ball in accordance with the rules.  With points only being won by the serving team, games are generally played to 11 points (win by 2).

The USAPA – formed in 2005 – maintains and updates the official rules of pickleball. You can download the rulebook – or view a compilation of pickleball rules clarifications and interpretations for many of the common — and not-so-common — scenarios that happen on the pickleball courts by clicking here. Scoring is one of the most confusing aspects for the pickleball newbie.  The following represents the “CliffsNotes” version for proper scoring when playing doubles. Games are typically played to 11 points (win by 2 points).  Points can only be awarded after a rally to the serving team.

If it’s your team’s turn to serve, both partners get a chance to serve and score as many points as they can before relinquishing the serve back to the opponents – unless it’s the first serving rotation of the game – in which case only the player that started serving gets to serve in this first service rotation. The partner does not serve in this initial rotation.

Some venues may experiment with rally scoring in an effort to speed up games when there are others waiting to play. In rally scoring, points are awarded after every rally — regardless if you are the serving team or the receiving team.

Scoring in singles is a bit easier than that of doubles – in part because there is no second server.

Because there is no second server in singles, when the receiving player wins the rally they earn the right to serve (side-out).

There are many different formats for play in pickleball – with venues often experimenting with what works best.  Formats may include “open” play, round-robins, “traditional” tournaments, luck-of-the-draws, ladder leagues, and shootouts.  Some venues may have a challenge court that is occupied by the same team (winning team) until “challengers” are able to beat them and replace them. 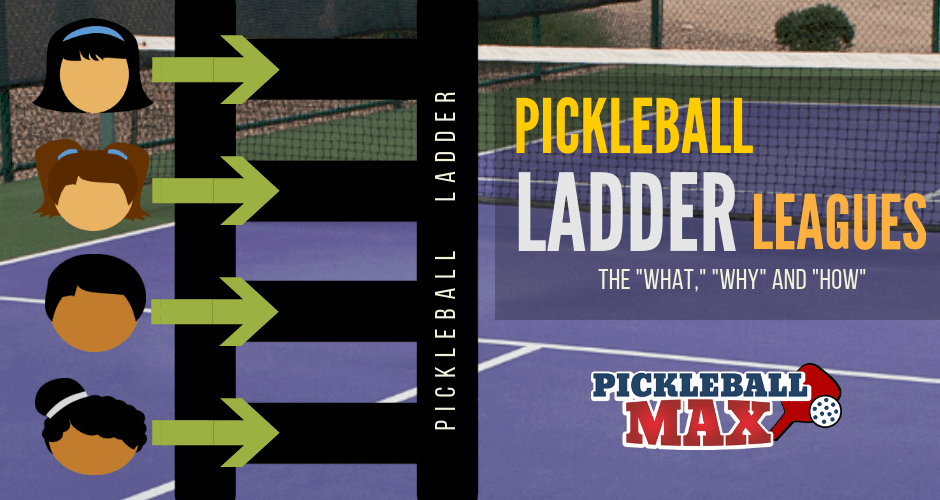 In addition to the multiple numbers of formats, there are also a seemingly equal number of methods to implement for the fair rotation of players when courts are busy.

Some #pickleball venues stack paddles, some use whiteboards and some just let players wander to the court of which they wish to play. And still, others have no organized method of rotating players.

Rotating players is undoubtedly one of the biggest challenges when courts are busy.

Where Can I Play Pickleball?

Pickleball is now played in a host of different locations. Check your local rec center or YMCA. Search for and join some local Facebook Groups and pose the question. Ask at your local tennis clubs if they offer pickleball. More and more tennis venues are adding pickleball.  Contact your local USAPA pickleball ambassador. And, of course, check out the “Places to Play” section of the USAPA website.

>>READ MORE: Where can I Play Pickleball? Find a Pickleball Court Near You!<<

So, having found a place to play, it’s time to devise a winning pickleball strategy so that you can start beating your opponents. 🙂  Pickleball strategy comes in many different flavors. As you will come to realize – if you haven’t already – it’s often a battle between contrasting styles/strategies of play.

However, one thing that is universally agreed upon when it comes to playing winning #pickleball is to get yourself to the NVZ line.

It’s at this NVZ line that points are more easily won.  So having said that, every return-of-serve should be followed immediately to the kitchen line (and split-stepping as you work your way through the transition area). In addition to this strategy, there are certain things you should not do.  With that in mind, here are my Top 10 Technique & Strategy Flaws [that may be] Impeding your Pickleball Progress.

Although you won’t find pickleball etiquette standards in any rulebook, abiding by a certain [unwritten] code of etiquette is equally important.  Here are my top 10 unwritten etiquette rules for the pickleball newbie… and for some experienced players too! When pickleball started, players would play with wooden paddles. However, technology has changed over the years. The wooden paddles of yesteryears have now been replaced with graphite and fiberglass paddles made with honeycomb cores.

Pickleball paddles have varying weights, shapes, grip sizes, material make-up – and, of course, prices.  Because each person has their own, unique preferences in a paddle, one “size” definitely does not fit all.  A paddle that’s right for you may not be right for me.  If possible, before purchasing a paddle, try out a couple of different models to see what is most comfortable for you.  If you’re brand new to pickleball, you may want to try out some entry-level paddles from Amazin’ Aces.  They are perfect – and favorably priced – for the pickleball newbie.

Pickleballs are plastic perforated balls that have between 26 and 40 holes.  If playing pickleball outdoors — outdoor balls are typically used. The “outdoor” ball – because it is slightly heavier, harder, and has smaller holes – travels significantly faster than the indoor ball.

>Click here for your complete guide to pickleball balls<< It’s important to look good and feel good on the pickleball court.  In our pickleball gear guide, Product Recommendations for the Pickleball Addict,” we include everything for the pickleball addict — including pickleball paddles, shoes, bags, Fitbit Activity Trackers, water bottles, sunglasses, coffee mugs and more.

It’s generally accepted that pickleball is very addicting.  It’s not unusual for people to play for several hours at a time, several days a week.  Pickleball is social.  It’s active.  It’s healthy.  It’s challenging — yet has a very quick learning curve.

>Click here to read my 10 reasons why I love pickleball.<<

So, how addicted are you?  Take the following 10-question quiz and find out where you would be categorized on the Pickleball Passion Meter — and once completed, be sure to share the results on Facebook! It should be a lot of fun! So, What is Pickleball?

Hopefully, you now have a better understanding of the game of pickleball and can answer this question when posed by your family or friends. If you haven’t already tried playing, give it a try today. For more information about pickleball, please be sure to subscribe to our free newsletter. The newsletter will be chock-full of tips, rules, strategies, and more.

>>READ NEXT: 101 Pickleball Terms to Add to Your Vocabulary<<