You are here: Home / Shots / How to Return the Pickleball Lob Shot Effectively & Safely

As a team getting successfully lobbed and driven off the non-volley line, it can certainly be frustrating. With every lob from your opponent seemingly landing just out-of-reach and within 3 or 4 feet of the baseline, that frustration grows.  Not only are you and your partner having a hard time chasing down the ball, but if you do manage to get a paddle on it, your opponent is poised each time for an easy put-away on the next shot. 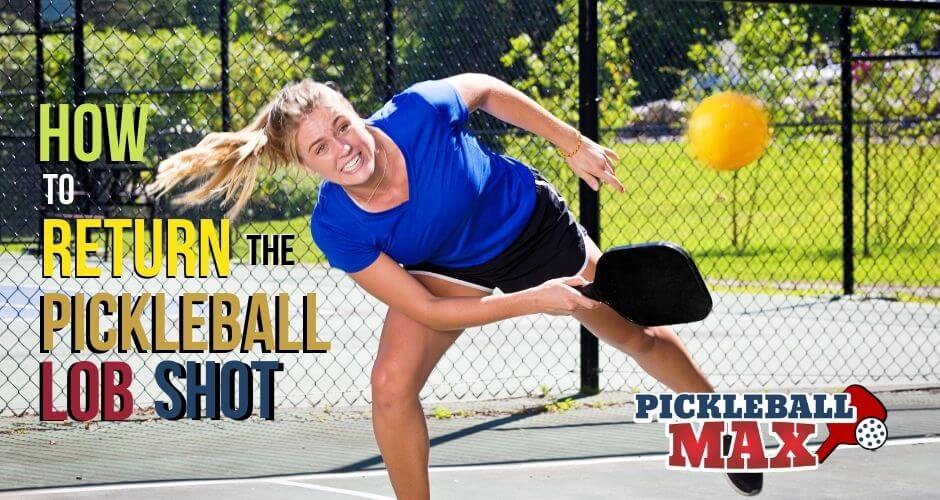 So how does one successfully return a well-placed lob, turn the tables on the lobbing team and tilt the advantage back into the favor of the team who was lobbed? Unfortunately, there’s not a simple answer. It requires significant patience and practice – and an understanding of lob retrieval strategy. Having said that, here are a few overarching concepts that will give you the best opportunity to successfully return the lob and extend the rally.

When in comes to returning a well placed lob in pickleball – one hit just out of reach – it’s critically important to (1) understand partner responsibilities, (2) use proper footwork to get yourself in position to safely return the lob and (3) select the  type of shot that gives you and your partner the best opportunity to neutralize the rally.

Partner “Responsibilities” When Returning a Lob

One of the goals for the lobbing team is, no doubt, to create confusion and chaos between you and your partner.  Which of the two players should return the lob? Should you switch? Should you stay? Should the partner of the person returning the lob stay at the non-volley line? Or should they drift backward with their partner?

There is significant opportunity for chaos and confusion when retrieving a lob in #pickleball – particularly if the two players rarely play together.

To help alleviate this chaos and confusion I have created a few FAQ’s with respect to player responsibilities when returning the lob:

Let’s first address the lob hit into one of the corners bounded by the baseline and sideline. Because it would be a significantly longer distance for the partner to cover, the lob hit into the corner (let’s say within 5 feet of the sideline) should be retrieved by the player positioned closest to that sideline.

For the the lob that’s hit relatively down the middle of the court (let’s say within 5 feet in either direction of the middle line), I would recommend that the partners switch – such that the partner of the player being lobbed retrieves the lob.  That partner, by running diagonally and not straight back will have a much better angle to the ball.

For the lob hit pretty much exactly down the middle of the court, I would recommend that the player who would play the shot with their forehand takes the shot.  Typically, but not always, the forehand will be the easier shot.

Question: Should the partner of the player returning the lob maintain their current position at the non-volley line?

Answer:  The best strategy is for the partner of the player returning the lob to retreat backwards as well (switching sides with the partner if and as needed) so that you don’t end up with one player back and one player up. That opens up far too many angles for your opponents to exploit on their next shot.

Proper Footwork Required to Effectively and Safely Return a Lob

When retrieving a lob it’s absolutely critical to have proper footwork.

The last thing you want to do when getting lobbed in pickleball is to backpedal to the ball as you risk tripping over your heels and breaking an ankle, wrist or much worse.

There are a handful of shots to executive when retrieving the pickleball lob.

If you were able to get the ball with time to spare, the first option should be an attempted drop shot into your opponent’s non-volley zone. This will force your opponent to “hit up” on their next shot and it will give you and your partner time to once again advance to the non-volley line.  As you are retrieving the ball and getting yourself beyond the ball, hit the ball as it’s descending.  This is similar technique to that of a “traditional” drop shot.

The defensive lob is another option when retrieving the lob.  Since overhead smashes are often difficult to put away, lobbing the lob may be an effective strategy to bide time to get you and your partner back into the rally.

A third option is a drive shot. This option will generally be the least effective of the three because, by driving the ball, you have not given yourselves sufficient time to “reset” and minimize the chaos.

A final option, and arguably riskiest of all, is a “tweener” – a shot hit between the legs with one’s back to the net.  This should only be attempted by advanced players because, well, it’s risky… in more ways than one!

Learning to successfully return a lob shot is critical in your advancement as a pickleball player.  Good partner communication and expectations, proper footwork and appropriate shot selection will help as you seek to get yourself out of trouble – and hopefully back into a neutral position in the rally.